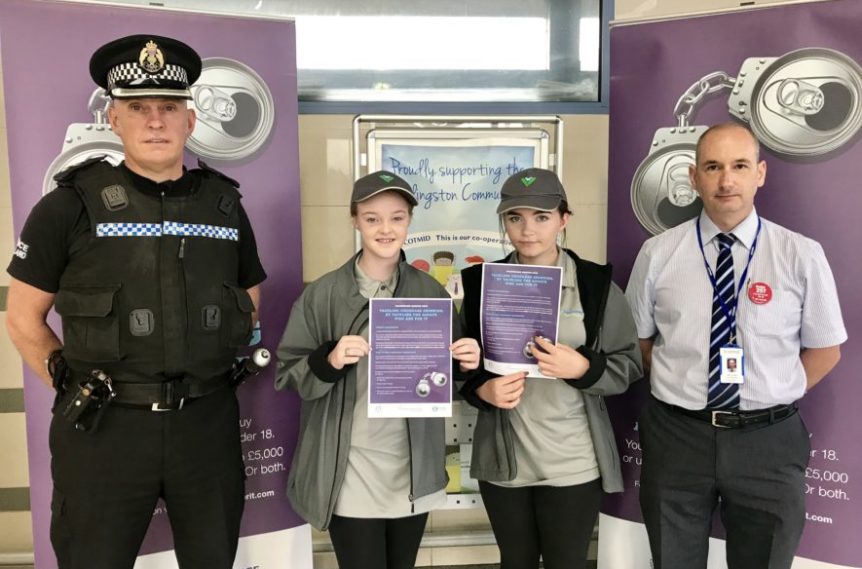 The ‘You’re asking for it’ campaign in North Lanarkshire is proving to be an effective deterrent as adults are urged to think twice before they consider buying alcohol for underage children.

Police Scotland analysts report that antisocial behaviour has reduced by 6%, reports of street drinking in public places has reduced by a significant 55%, while youth disorder incidents are down 7%.

The campaign – which runs until the end of September – has led to 32 detections of proxy purchasing. The partnership project is driven by the Scottish Alcohol Industry Partnership, Police Scotland and North Lanarkshire Community Safety Partnership. Local retailers are also playing a key role, by helping to identify the proxy purchase hot spots in their communities.

Motherwell & Wishaw Area Inspector, Alistair Anderson said: “We are pleased to see a reduction across the board of crimes and incidences linked to underage drinking. The 55% reduction of reports of drinking in public places is particularly encouraging. While the campaign can’t take all of the credit for these results, it most certainly has contributed to these positive stats.

“The evidence appears to be clear that the kids are not getting alcohol easily and it is having a positive impact on North Lanarkshire. By limiting the amount of alcohol in the community, we will see less street drinking offences. However kids are increasingly clever with how they obtain alcohol and I urge everyone in their communities to be vigilant to help us continue to tackle the issues. “

Police Scotland Youth Volunteer Alanna Ferguson (15) said: “You’re Asking for It’ is a good idea. Teenagers get themselves and grown-ups into trouble by trying to buy alcohol. A lot of people have seen the adverts so hopefully they’ll think twice before buying alcohol, or asking someone to get it for them.”

Ian Lovie, Licensing & Compliance Manager for Scotmid said: “Scotmid is pleased to be actively involved in this campaign. I believe it delivers a powerful message. This partnership approach should encourage other areas in Scotland to tackle the issues associated with underage drinking. Speaking from a retailer’s perspective, having this framework and support is invaluable. It is very difficult to identify when proxy purchases occur.”

‘You’re asking for it’ is responding to intelligence that under 18s are increasingly accessing alcohol by other means, such as asking an adult to buy it for them – initiatives such as Challenge 25 have reduced the number of direct sales of alcohol to under 18s.

Police Scotland continue to deploy officers to address the issue of proxy purchase and to actively target known hotspot locations and adults who think they are doing no harm in purchasing alcohol for children.

Parents, retailers and the wider community are being encouraged to support the campaign by reporting suspected proxy purchase to keep children and communities safer.

Adults who buy alcohol for children in North Lanarkshire are asking for a fine of up to £5,000 or a jail term. Adults in the area are becoming aware of the potential impact of proxy purchase, thanks to the campaign, and appear to be less likely to purchase alcohol for children.

The ‘You’re asking for it’ campaign is live throughout North Lanarkshire to tackle underage drinking, antisocial behaviour, crime and violence and builds on an award-winning pilot initiative in Wishaw and Motherwell in 2015.