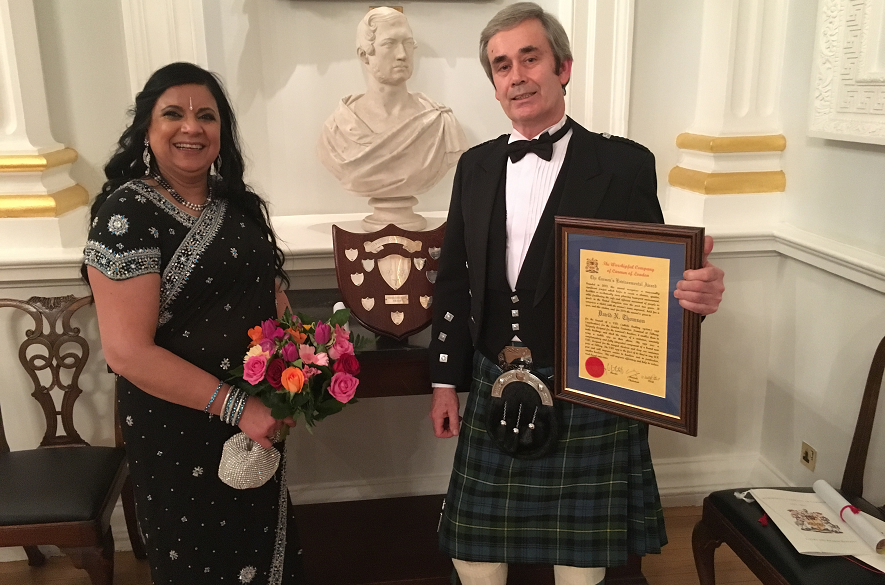 Forth Ports’ David Thomson has been presented with the prestigious Worshipful Company of Carmen’s Environmental Award. The award was presented to David at the annual awards dinner this week which recognises significant achievements, contributions and innovation of individuals, companies and the armed forces.

David, who is the Group IT Project Manager for Forth Ports, was presented with the award for the innovative system developed for haulier customers. The Vehicle Booking System (VBS) system is the UK’s first fully integrated mobile app and currently available for use by London Container Terminal’s hauliers. The system is complementary to a full desktop version of the VBS which is available over the internet, with the Mobile App being particularly suited to the smaller haulier, allowing the creation, moving of bookings, as well as checking the status of the containers while on the move via their mobile phone or iPad, and as a consequence overall assisting in minimising wasted journeys; reducing queues at the terminal and contributing to reducing air pollution.

Winning the award, David Thomson said: “I am honoured to collect this award from such a prestigious organisation and even more so on their 500th Anniversary. Very few awards are down to one person and my case this is no different with some excellent contributions from my team in both Scotland and Tilbury as well as our third party vendor TCS (based in Hyderabad). The mobile app development is a first for Forth Ports and we are very pleased with the result and the positive feedback we have received. We wanted to capture the opportunity to improve our service for our customers and gave special attention to ensuring it was simple, efficient and easy to use while also paying attention to the aesthetics.”

The VBS system and the mobile app have already undergone further development with progress currently underway to implement a VBS solution at the Grangemouth Container Terminal in April 2017 involving a modified multi Terminal / Asset version that provides the option for extending its use across the group.