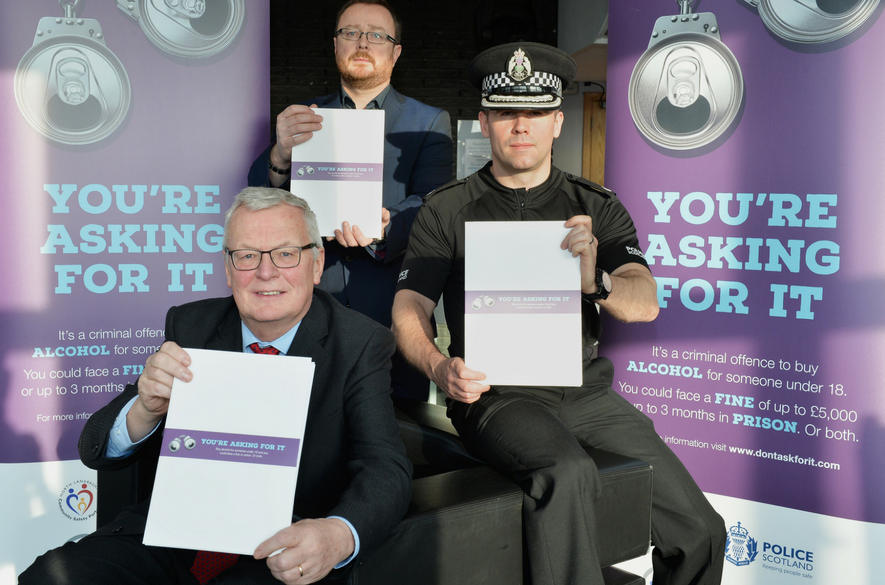 The award-winning You’re Asking For It campaign is raising awareness of the damaging effects and criminal nature of buying alcohol for under 18s.

Following a successful local-authority-wide roll out in North Lanarkshire, campaign partners have developed an online resource to support local authorities and other local partners across Scotland hoping to follow suit.

Asking an adult to buy alcohol for under 18s is one of the most common tactics used by young people to access alcohol. The Licensing (Scotland) Act 2005 states that it is an offence for a person to “act as an agent for a child in purchasing or attempting to purchase alcohol”. This is also known as proxy purchase.

The online resource was launched at an event in Motherwell and was attended by over 100 people. Attendees included representatives from 17 local authorities, Police Scotland, the retail sector, alcohol producers, health workers and many more.

“As the first local authority to roll out the You’re Asking For It campaign, North Lanarkshire Council endorses the approach and we would encourage other local authorities to consider running the campaign.

“The health and wellbeing of our young people is important to us and You’re Asking For It has directly inspired further developments. In schools, where they are exploring community co-production to explore the key issues through drama and peer-to-peer learning, so that the young age group are aware of the dangers and consequences.”

Over 300 retail outlets supported the North Lanarkshire campaign, while 14 proxy purchase hot spots were identified. According to Scott Porter Research there was a 34% increase in awareness of the legislation surrounding proxy purchasing amongst adults.

“The aim of You’re Asking For It is to reduce the risk of harm and vulnerability to children. It’s an issue that negatively affects communities which is why we’re cracking down on proxy purchasing by raising awareness of the consequences.

It is recognised that alcohol consumption is a factor in many crimes, both in terms of their commission and victimisation.  Supplying alcohol to children puts them at risk of harm, which is why it is so important that this campaign is a success. Alcohol-related antisocial behaviour and violence affects everyone. It might be someone you know who suffers.”

“Underage drinking plays a major role in antisocial behaviour, crime and violence in local communities. I commend the tireless work of council colleagues, Police Scotland, the retail community and public for rallying behind the campaign in North Lanarkshire.

Our focus now is to build on this success and combat the problem on a national level. It’s clear to us that, like in North Lanarkshire, there are partners operating with shared objectives, who just need the tools and structure to take action and make it happen.”

Police Scotland analysts report that youth disorder incidents reduced by 10% in North Lanarkshire. The campaign also contributed to a 51% reduction of reports of children drinking on the street.

These results suggest that children have found it more difficult to source alcohol as a result of the widely publicised campaign.

The resource is designed to educate and support. It provides step-by-step advice, a useful case study example, artwork files for a wide range of creative assets plus evaluations from the pilot campaigns and roll out in North Lanarkshire. These can all be used to promote buy-in from stakeholders if you would like to see this campaign in your area.

Adults who buy alcohol for children may face a fine of up to £5,000. Depending on the circumstances you could also face a prison sentence of up to three months and a criminal record.