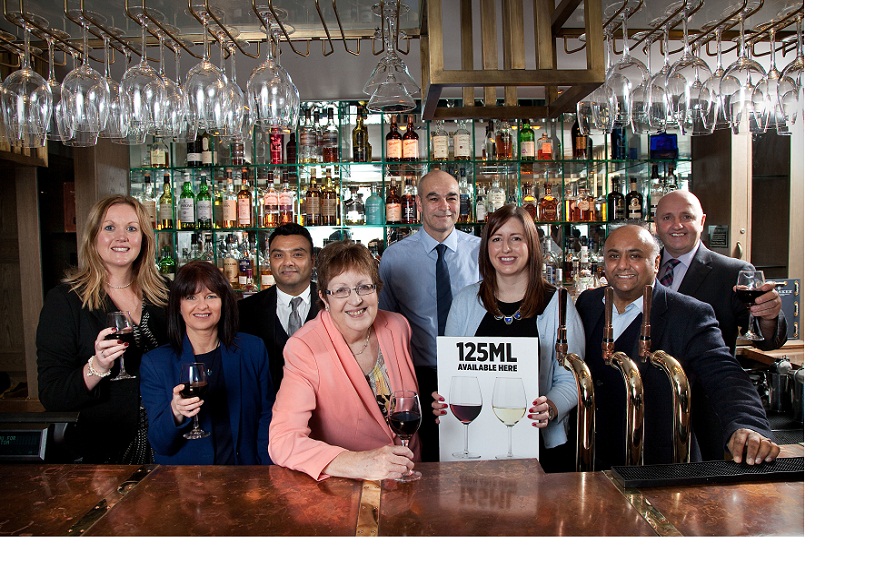 The campaign – the first of its kind in Scotland – was a partnership between Scottish Government, the Scottish Alcohol Industry Partnership (SAIP) and East Dunbartonshire Council. Licensed premises supported the campaign in great numbers with 100% of eligible licensed premises volunteering to take part and some initiating offers such as 125ml spritzers and restaurants pairing 125ml glasses of wine with their set menus.

Using two surveys (pre and post campaign) the partnership was able to gauge changes in awareness amongst target consumer groups. The survey was coordinated by communications consultancy Spreng Thomson in partnership with East Dunbartonshire Council.

Prior to the consumer campaign, 40% had heard about the 125ml measure rising to 69% post campaign, indicating a 70% improvement in awareness of the 125ml wine measure.

You can view the full report here

Aileen Campbell MSP, Minister for Public Health and Sport said: “The Scottish Government was delighted to support this local campaign, which has been successful in making people aware smaller wine glasses are available. Clearly it is important people have the ability to choose a smaller measure if they wish and by offering the 125ml measure, businesses are giving their customers more choice and the opportunity to drink responsibly.

“This initiative is a good example of partnership working between local partners and wouldn’t have been possible without the joint input of East Dunbartonshire Council, participating pubs and restaurants and alcohol industry partners.”

The campaign enjoyed support from the local press and used a range of methods to build consumer awareness of the new 125ml measure. Social media content and a competition raised awareness of the smaller measure. Promotional materials included an innovative drinks coaster designed by agency, Story. The active involvement of the Council’s Licensing Advisors was key to the effectiveness of the campaign which reached a range of audiences and impacted positively on consumer awareness and interest in the 125ml measure.

East Dunbartonshire Council Leader Rhondda Geekie said, “We were delighted to be part of this campaign, supporting licensees in raising awareness of glass sizes and customer choice.  The results are really encouraging, clearly showing that the campaign has had a positive impact on consumers.”

Consumer feedback during the campaign included: “You don’t always want a large glass, so it’s nice to have a choice.”…“ It’s good to highlight the choice is available.”

The campaign stretched across all of East Dunbartonshire, as venues in Kirkintilloch, Bishopbriggs, Lenzie, Bearsden, Milngavie, Lennoxtown, Milton of Campsie, Torrance and Balmore all took part helping to deliver the rise in consumer awareness. Claire Smith, from the Glazert Country Hotel near Lennoxtown, saw an increased demand for smaller glass sizes:

“I took the sales figures for one night as an example. It turned out that 40% of the glasses of wine which we sold were actually in the smaller measure. It’s perfect for the mid-week and if you just want a small glass with dinner, or to relax with friends.”

“We’re really encouraged by this campaign and have nothing but praise for our partners in East Dunbartonshire Council and of course the outstanding venues who promote the 125ml glass size. Premises are trying to offer more wines by the glass and it’s very important that bar staff share this with customers. We look forward to continue growing 125ml use across Scotland.”