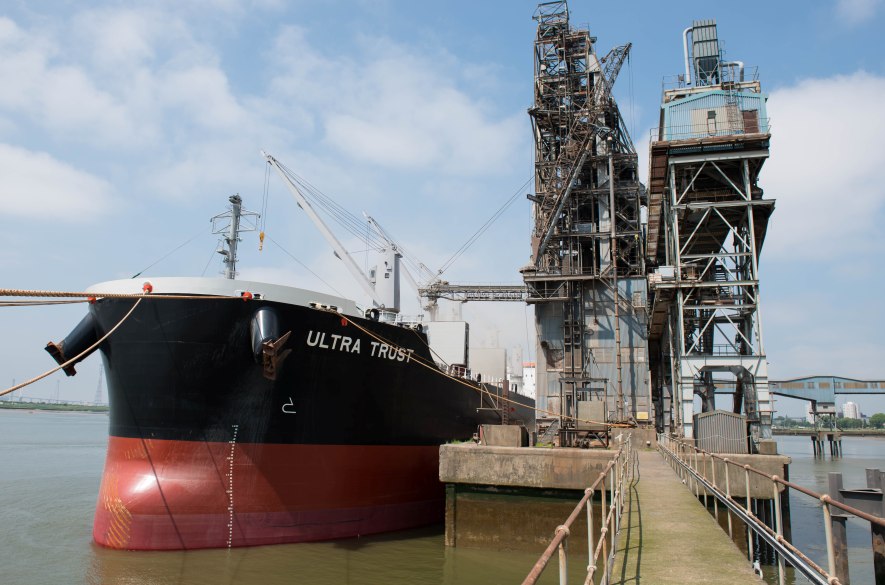 Port of Tilbury and Frontier Agriculture will mark the successful first year of their strategic partnership with the export of 55,000 metric tonnes of wheat, the largest of the season, aboard a Panamax bulk carrier this week.

The 61k tonne vessel, the Ultra Trust, was loaded with wheat, destined for Indonesia, at the Thames port. The agreement between London’s major port and the UK’s leading crop production and grain marketing business was announced in early 2015. In its first year the agreement has resulted in a significant amount of cereals and oilseed, grown by farmers in the South East, being exported from the port’s grain terminal to a range of destinations including Spain, North Africa and Egypt.
Farmers in the South East are benefiting from this long term agreement as it offers them a wider range of homes for their produce via a facility which is close to their business.
Commenting on the partnership, Peter Ward, Senior Asset Manager at The Port of Tilbury said: “We are delighted that this first year of the partnership has been a success. One of our ambitions was to work with Frontier to grow the grain terminal and this is already happening as we announce a further expansion to the facility due to be opened next year.”
Simon Christensen, Grain Trading Director for Frontier Agriculture, said: “This first year of our strategic agreement has proved even more successful than we’d hoped. It’s been a particularly vital avenue for marketing farmers’ crops given the current low wheat price and a relative surplus of supply after a number of years of bumper crops. Access to additional overseas markets helps us keep grain moving which supports local prices. Long term access to international markets via a deep sea port with good storage facilities means we can source grain directly from farmers in the region and they can deliver to the port which is cost effective and efficient for them.”
Marc Rogerson, Wheat Trader for Frontier Agriculture, who has been responsible for the wheat export activity from the port, commented “Adding a further export facility to the options we can access for farmers has given us a number of benefits. It has enabled us to build on our existing relationships with overseas buyers and has strengthened our ability to deliver a range of different qualities of grain to the port, giving us more flexibility to price and competitively market directly from the port on behalf of farmers.”
The grain terminal at Tilbury is one of the UK’s largest, handling combinable crops each year both for export and UK markets. Throughout Frontier’s 10 years of trading, it has enjoyed a strong working relationship with Port of Tilbury; indeed the association dates back even further, as its parent companies have worked with the port since the 1970s. The current eight year agreement between Port of Tilbury and Frontier began in 2015.
The grain terminal has also announced plans for a major storage expansion at the port’s Grain Terminal as part of the port’s growth strategy. The multimillion pound investment will see storage capacity increase to accommodate up to an additional 16,000 metric tonnes of both import and export wheat at the Thames based port. Construction work will begin in April with an expected completion date of the third quarter of 2017.