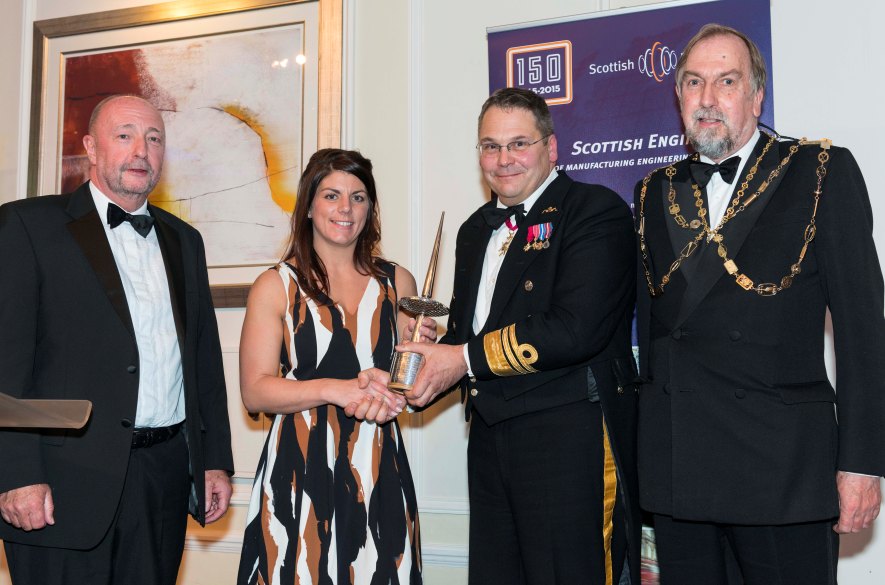 Forth Ports is celebrating the success of Harbour Master Ashley Nicholson who won the prestigious Scottish Engineering / Incorporation of Hammermen of Glasgow Award 2016 for the role she played in managing the marine operations during the construction of the new Queensferry Crossing in the River Forth.

Ashley was presented with the trophy at the glittering awards dinner held in Glasgow by Vice Admiral Simon Lister. The annual award is presented to an engineer or manager who has shown outstanding contribution to a business and Ashley was recognised for the project management of the marine operations which are key to the logistics of the construction of the new £1.4bn road bridge due to open later this year.

Ashley, is the youngest certificated Harbour Master in the UK, and is responsible for marine activity on the inner Forth Estuary which, during the construction of the bridge, has seen an increase of an additional 5000 vessel movements.

Bryan Buchan, Chief Executive of Scottish Engineering said: “As in the past, the standard of the entrants in all of our categories was of the highest order. Despite there being some economic difficulties caused in no small part by the price of oil we have been delighted by the quality of the competitors. Ashley Nicholson, the winner of the Scottish Engineering Incorporation of Hammermen of Glasgow Award showed remarkable abilities during the largest civil engineering project in Scotland this century, the construction of the Queensferry Crossing.”

Stuart Wallace, Divisional Director of Forth Ports said: “We are extremely proud of Ashley’s achievements. The Queensferry Bridge construction is one of the largest engineering projects in Scotland and Ashley and our marine team have played an invaluable part in ensuring that the river activity has been well co-ordinated to ensure smooth passage for the hundreds of vessels using the waterway each day.”

Commenting on her win, Ashley Nicholson, Harbour Master at Forth Ports said: “I am thrilled to receive this award. Working on the bridge project is a fantastic experience and has not been without its challenges. I am grateful to my marine colleagues for the support on this project and we are looking forward to seeing the bridge opened later this year.”