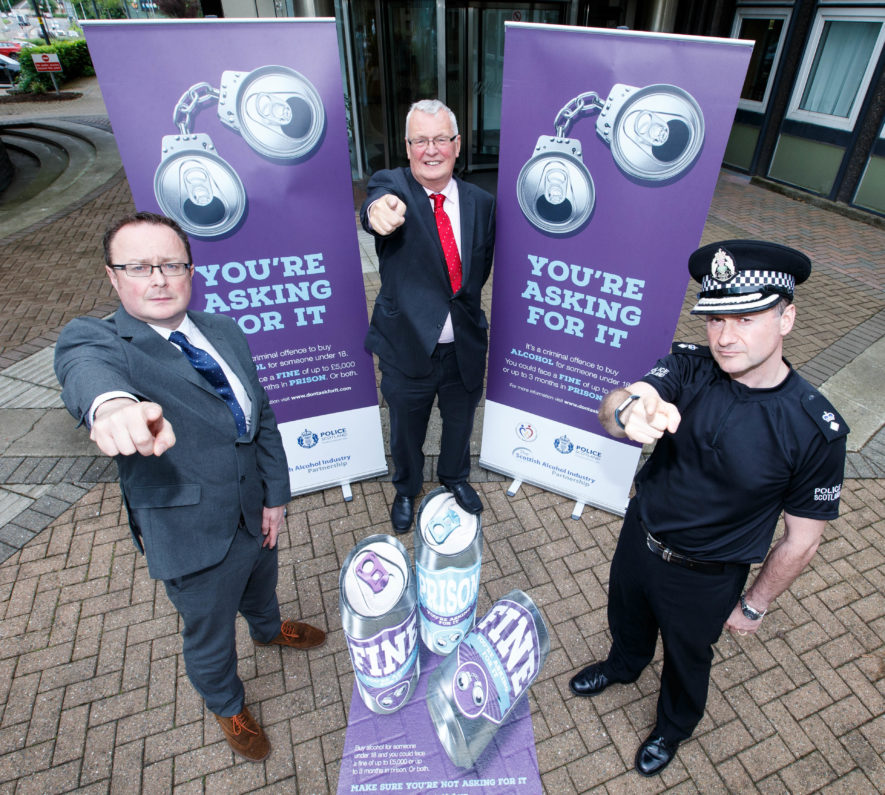 Adults who buy alcohol for children in North Lanarkshire are asking for a fine of up to £5,000 or a jail term.

The uncompromising message is being hammered home by a campaign driven by the Scottish alcohol industry, Police Scotland and North Lanarkshire Community Safety Partnership.

The ‘You’re asking for it’ campaign is launching throughout North Lanarkshire to tackle underage drinking, antisocial behaviour, crime and violence and builds on an award-winning pilot initiative in Wishaw and Motherwell in 2015.

It achieved the Police Scotland National Excellence Award as being the project that made the ‘greatest contribution to policing priorities’ in 2015.

The impact of the 2015 pilot contributed to violence across the localities dropping by 30%. Antisocial behaviour reduced by 13% and alcohol-related youth disorder reduced by 21%. By limiting the amount of alcohol in the community, the public reported 53% less street drinking offences.

The campaign is now gearing up for an even bigger geographical spread and potential impact.

Divisional Commander for Lanarkshire Division, Chief Superintendent Roddy Irvine said: “Underage drinking plays a huge part in antisocial behaviour, crime and violence in our local communities and it is important that we work together to tackle the problem and make our communities safer. Please support us in keeping our children safe and play your part in ensuring that your community is ‘not asking for it”

North Lanarkshire Council Leader Jim Logue said: “Reducing alcohol sales to under 18s has a significant impact on local communities, helping to improve safety, tackle crime and antisocial behaviour, and improve health among young people. This campaign sends a very clear message to adults that buying alcohol for young people is not acceptable and anyone caught faces a fine or prison sentence.”

John Lee, Head of Policy and Public Affairs, Scottish Grocers Federation and Chair of the SAIP Campaigns Group said: “We know that tackling underage drinking by targeting adults who buy alcohol for under 18s is successful, as proven in our previous campaigns in Motherwell, Wishaw and Leith. By running this new campaign across the whole of North Lanarkshire we hope to help reduce crime, antisocial behaviour and noise in the area and, most importantly, reduce the number of hospital admissions for young people.”

‘You’re asking for it’ is responding to intelligence that under 18s are increasingly accessing alcohol by other means, such as asking an adult to buy it for them – initiatives such as Challenge 25 have reduced the number of direct sales of alcohol to under 18s.

Throughout the campaign police will work alongside partner agencies and our communities to maximise awareness of the campaign to impress upon adults that it is not acceptable to purchase alcohol for children.  Police Scotland will also deploy officers to address the issue of proxy purchase and to actively target known hotspot locations and adults who think they are doing no harm in purchasing alcohol for children.

Parents, retailers and the wider community are being encouraged to support the campaign by reporting suspected proxy purchase to keep children and communities safer.

The campaign will run throughout the school holidays until mid-September.