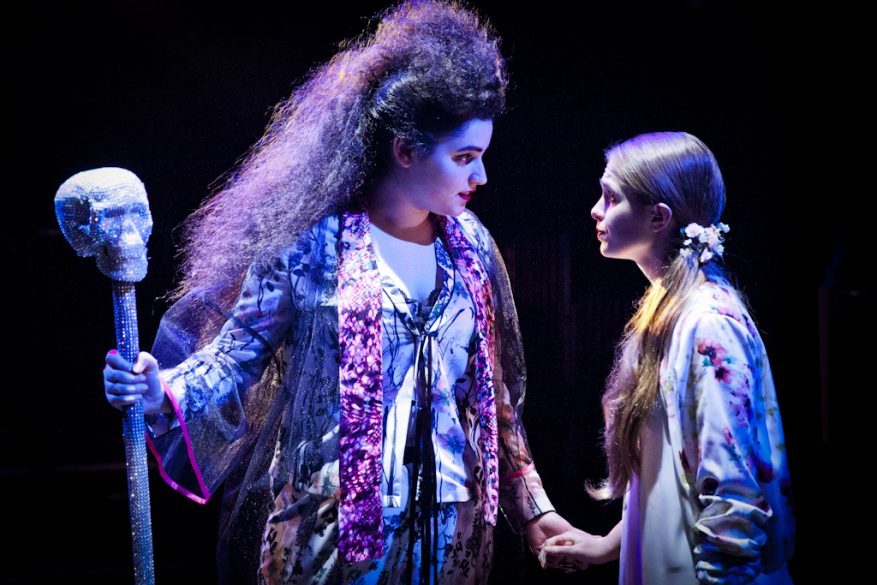 One of Scotland’s leading national youth performing arts companies is launching a spectacular double bill to mark its 40th year in operation.

The courses, workshops, classes and performances produced by Scottish Youth Theatre each year involve tens of thousands of young people and the company has created hundreds of successful productions over the last 40 years.

Thais Ramdani, 19, is playing Prospera in Shakespeare’s The Tempest, adapted and directed by Mary McCluskey. She said: “The Tempest is one of the most challenging plays I’ve ever worked on – my native language is French! The support Scottish Youth Theatre is giving us is brilliant and it’s such an exciting experience. I’m really looking forward to performing it on stage.”

A famous face dropped in to rehearsals to encourage the young cast of both shows: Blythe Duff, best known for her role as Jackie Reid in ITV’s drama series Taggart. Duff recently featured in National Theatre of Scotland’s touring production of The James Plays and is also an alumna of Scottish Youth Theatre

Scottish Youth Theatre patron, Blythe Duff said: “I’d like to congratulate Scottish Youth Theatre on its milestone 40th anniversary. I’ve been involved in 35 of those 40 years. It’s a special part of my life. It’s wonderful being a patron of an organisation where you can pop in and see the young people. You see how hard they are still working. I wish them every future success.”

A brand new piece devised by the Company called Forbidden will also debut on 3 August.  The devised piece is directed by Julie Brown – one half of  Random Accomplice.

This year also marks the 400th anniversary of William Shakespeare’s death. The Tempest is one of the Bard’s final plays and features everything from sorcery and sibling rivalry to revenge and imperialism. Using digital imagery with illusions, magic and music, the company’s take on this classic story is an exciting addition to their diverse productions in their 40th year.