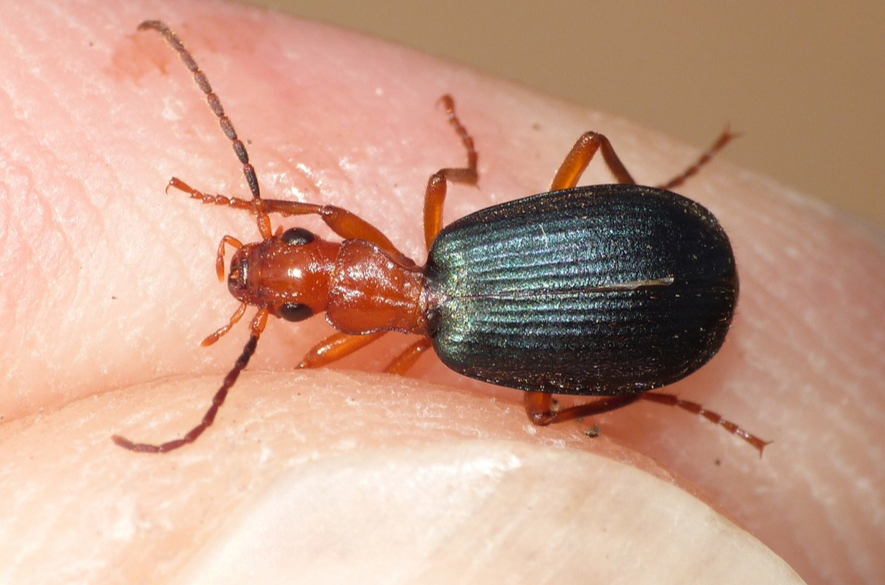 A wildlife area created six years ago to offset losses of habitat from the development of the London Distribution Park (LDP) at Tilbury, has proved so successful it has been ranked by one of Britain’s foremost entomological consultants as of national importance for insects and other invertebrates.

The site at Mucking Landfill was created in 2013 by spreading chalk slurry over an area equivalent to six football pitches and then placing ‘dunes’ made from waste fly ash and chalk bunds on the top. By agreement with the owners of the landfill site, Enovert South, it was then left unmanaged and allowed to develop naturally.

Monitoring studies last year found that the new habitats already supported a proportionally higher number of rare and scarce invertebrate species than had been found at the LDP site in 2011, prior to development.

Dr Mark G. Telfer, an independent entomological consultant, recorded 236 invertebrate species in the new habitat in 2018. Of these, 15% are deemed to be rare, scarce or have a threatened or near threatened conservation status. Further analysis has shown that the new habitat supports an exceptionally high quality ‘bare sand and chalk’ assemblage of species.

Ecologists will continue to monitor the site but as the initial study has been so successful the report recommends creating additional invertebrate habitats at Mucking – a scheme that is now in process to offset impacts from the Tilbury 2 development on the site of the former Tilbury Power Station.

Ecologists Bioscan UK Limited designed the wildlife area on behalf of the Port of Tilbury.

Peter Ward, Commercial Director at Port of Tilbury, said: “The results of this study are fascinating and I am really pleased the habitat has been deemed so successful that it is now considered of national importance.

“We take our environmental responsibilities very seriously at the Port of Tilbury and it is clear that this habitat at Mucking Landfill is supporting a remarkable richness and abundance of species while succeeding at what it was set up to do – offsetting the losses incurred from the development of LDP.

“We will continue to work with Bioscan on future studies and hope to replicate a similar study to coincide with Tilbury 2.”

Dominic Woodfield, Managing Director at Bioscan UK Limited, said: “The Thames Estuary is a known hotspot for rare invertebrates, but many of these species are increasingly restricted to post-industrial or brownfield sites which are often identified for redevelopment.

“The need for an offset scheme to ensure no net loss of biodiversity from the development of the LDP presented an opportunity to try and create those post-industrial conditions from scratch.

“We deliberately used selected waste materials from construction and industrial processes that we knew would create the right physical and chemical conditions and designed the scheme so that these would be placed and shaped in a way that would maximise their potential.”

Mark Silvester, CEO at Enovert, said: “Restoration of Enovert’s Mucking Landfill site and the country park will benefit hugely from the valuable habitat gained from inclusion of the LDP and Tilbury 2 offset schemes. The success achieved following importation and placement of the LDP material shows how important a part landfill restoration schemes can play in delivering improved biodiversity at both a local and national level.

“We’re delighted that the Mucking site is now home to one of the UK’s most important wildlife areas. The long-term management of this very special and important site will continue to be supported by the Enovert Community Trust in partnership with the Essex Wildlife Trust.”

Marc Outten, Area Manager South East at Essex Wildlife Trust, said: “The results from the 2018 surveys are extremely exciting and further highlight the importance of the Thames Gateway for invertebrates of which many are rare or endangered. The partnership between the key stakeholders will not only maintain that these threatened creatures continue to have a stronghold at Mucking and along the Thames, but also the chance to reconnect local communities with these important species and the natural environment in which they live.”

Image of a Bombardier Beetle (Brachinus crepitans) found at the habitat.