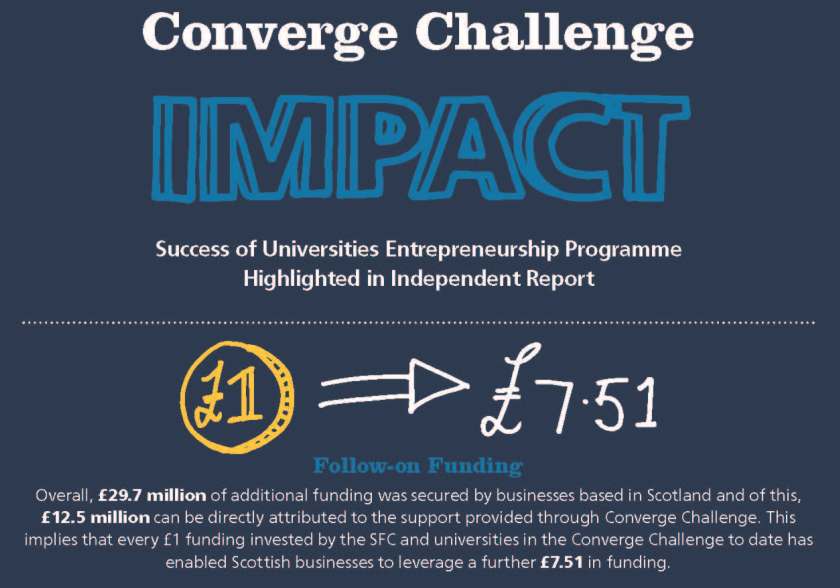 Scottish start-ups and university spinouts who participated in Converge Challenge have leveraged over seven times in subsequent funding the amount that the programme’s university partners and the Scottish Funding Council (SFC) originally invested in the company creation competition, a new independent report reveals.

Converge Challenge is an entrepreneurial development programme and company creation competition for staff, students and recent graduates from Scotland’s Universities and Research Institutes. Since its inception Converge Challenge has awarded prizes with a value of £663,000, with 56% awarded in cash, and 44% awarded in in-kind support.

The impact of Converge Challenge has been independently evaluated in detail for the first time by BiGGAR Economics. Published today (27th March, 2017) the report, found:

“Six years on, we wanted to assess Converge Challenge’s contribution to the Scottish economy and the return on investment delivered for funders and stakeholders. This independent report provides us with some hard numbers to show the real impact Converge Challenge is making on the entrepreneurial landscape, amongst the academic community and, of course, Scotland’s economy; this would not have been possible without our funding from eight Scottish universities and the Scottish Funding Council.

“Converge is only as good as our alumni companies and it is fantastic to see the growth in funding, investment, jobs and, most importantly, the ambition and confidence of our programme participants. It is a delight to support the creation of companies like Shot Scope Ltd that within three years are now employing 20 staff.

“The support from Converge Challenge comes at a time when you’re uncertain about the future and what route to take.  You’re on your own trying to do everything but Converge points you in the right direction, gives you the right skills and allows you to believe that you can set up and run your own business. It gives you the confidence and belief to say ‘I can do this’.”

Scottish Funding Council and the eight research intensive universities have been Converge Challenges’ most important partners to date and have been instrumental in supporting the Scotland wide initiative.

“Converge Challenge throws the spotlight onto some of the amazing entrepreneurial talent emerging from Scotland’s universities and research institutes. This report shows just how well this emerging talent is doing in securing investment, marketing successful products and creating great jobs for the Scottish economy.”

Converge Challenge brings together the most ambitious and creative thinkers from any Scottish Higher Education Institute (HEI) and offers three award categories. Converge Challenge: for those with an established idea; KickStart: for early stage ideas; and Social Enterprise: for ideas that will have a positive impact on social and environmental issues. Converge Challenge is open to staff, students and recent graduates and ideas can be for a product, process or a service, at any stage of development and from any industry sector.

Converge Challenge 2017 is currently open for applications and closes on Monday 10th April at 5pm GMT. To enter visit www.convergechallenge.com

All statistics referenced in this press release are sourced from: Economic Impact Report of the Converge Challenge by BiGGAR Economics. This report is available for download at: www.convergechallenge.com