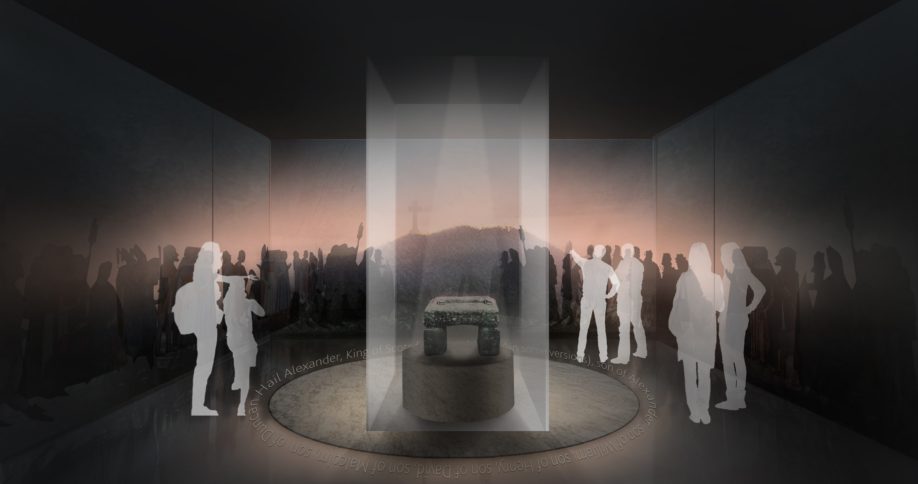 Could the Stone of Destiny be returning to Perthshire?

Perth & Kinross Council’s request to house the Stone in a new museum in Perth is being considered by the Commissioners for the Safeguarding of the Regalia and the Scottish Government is now hosting an engagement exercise to gauge public opinion on the location of the Stone.

You can share your views by going online here.

Perth & Kinross Council and the UK Government are investing £23 million in a spectacular new museum at the former Perth City Hall, opening early 2022. The funding is part of the £700 million Tay Cities Deal which is jointly funded by the UK and Scottish Governments and regional partners. There, the Stone of Destiny would be free to visit, in an accessible city centre public building two miles from its original home at Scone. At City Hall the wider significance of the Stone can be revealed by displaying it alongside one of the UK’s oldest and most important public collections.

Visitors would enter the centrepiece display, the Stone Pavilion, to be introduced to the Stone through a short film sweeping through time to witness how Scotland was born from the Perthshire landscape. The film will also tell the life story of the Stone from its mythic origins to its role in early kingship ceremonies, and its creation as a powerful symbol of nationhood and monarchy which remains today.

After the film, visitors will see the Stone of Destiny. Displayed in a custom-designed secure case, the Stone will be animated with light and sound, recreating the 13th century crowning of Alexander III.

Council Leader, Councillor Murray Lyle, said: “The Stone of Destiny is one of the UK’s most important cultural objects. Here in Perth we can display it in a context as close to its original home at Scone as possible and within reach of millions of Scottish people who live outside the central belt – meeting the aspiration of Scotland’s national heritage strategy to make our cultural heritage open to everyone.

“The transformation of City Hall is part of our wider £53 million investment in culture, part of the wider Tay Cities Deal vision to bring more visitors, high quality jobs and opportunities to the region.”

Charles Kinnoull, Chair of Culture Perth and Kinross, the independent charity which operates museums on behalf of the Council, said: “Culture Perth and Kinross is the steward of one of the UK’s oldest and most important museum collections and we have significant experience in caring for museum objects as precious and important as the Stone of Destiny. People can be confident it will be safe and secure in Perth.”