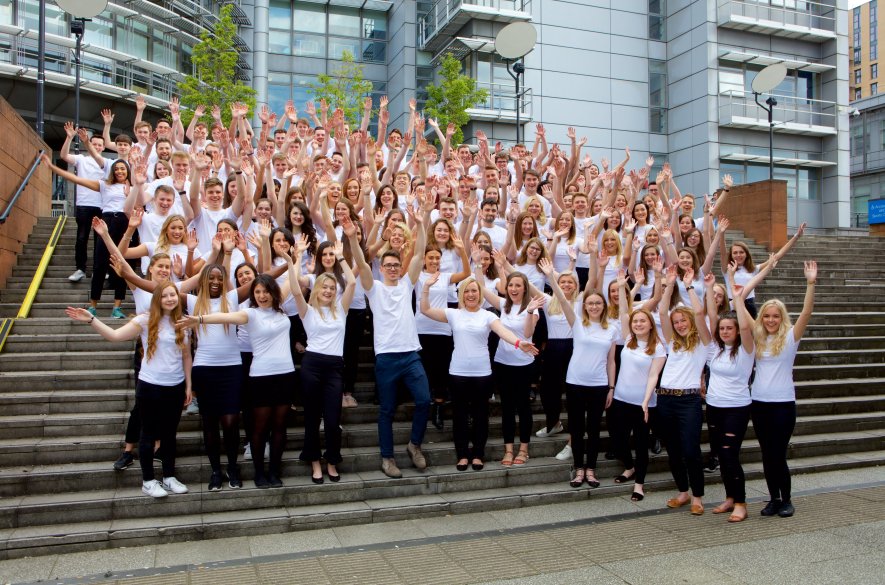 In the 10th anniversary year of the programme, a record 165 students are gearing up for the Entrepreneurial Scotland’s Saltire Scholar Internship Programme.

The programme, which provides Scotland’s most talented students with opportunities to work with 77 leading organisations in sectors including the music industry, banking, fashion, financial services, food and drink, life sciences, energy, manufacturing as well as not for profit organisations.

The 10th cohort is the largest yet with 165 participants, up from 142 in 2016. Scotland’s leading internship programme has grown significantly since it launched in 2007 with just six participants. The 2017 cohort has students representing 15 of Scotland’s Universities and is 57% female and 43% male.

The students will embark on once-in-a-lifetime internships across the world including to: Scotland, Ireland, England, Germany, The Netherlands, Switzerland, China, UAE, USA, and for the first time, Canada.

Barclays Bank who will host 15 interns – their largest-ever number of Saltire Scholars. For the first time they will have Scholars at their offices across Scotland. Fender Musical Instruments will be hosting Scholars in Los Angeles and Arizona. In addition, Fender CEO Andy Mooney – a master of mass-market customisation – will fly into Scotland to host an Entrepreneurial Scotland event on 19th July.

“The programme is not only life changing for the students that take part, it is hugely valued by our host company partners and Saltire Scholars are highly sought after by graduate employers.

“Firms who want to grow their business say their biggest challenge is finding talented people with the ambition, attitude and skills to get the job done.  Saltire Scholars again and again show that they have these qualities.”

“This is truly a landmark year for our Scholar internship programme. We set out a decade ago to find, fuel and spark students with potential to become the next generation of leaders for Scotland. Fast forward 10 years and we now have an alumni of more than 1,000 Saltire Scholars from across Scotland who are giving back to their country and making an impact in organisations around the world.

“The breadth of opportunity available to the Scholars is unrivalled – from working with ambitious start-ups to global corporates –  there is simply no other internship programme like it.

“I have to thank the fantastic team that works tirelessly all year round to deliver the programme, the GlobalScot network for their ongoing endorsement, Scottish Enterprise for supporting the programme in the early years, our trustees, donors, university partners and host companies and finally to our alumni – many of whom have gone on to do amazing things from right here in Scotland.”

Saltire internships are open to undergraduate students from Scottish Universities in their penultimate year of study and are fully funded through supporters and donors of the Saltire Foundation charity which aims to find, fuel and spark the next generation of business leaders in Scotland. The Saltire Foundation is the philanthropic arm of Entrepreneurial Scotland.

Saltire Scholars are automatically enrolled as Emerging members of Entrepreneurial Scotland’s providing world class networking, mentoring and events to support the development of an entrepreneurial mind-set.