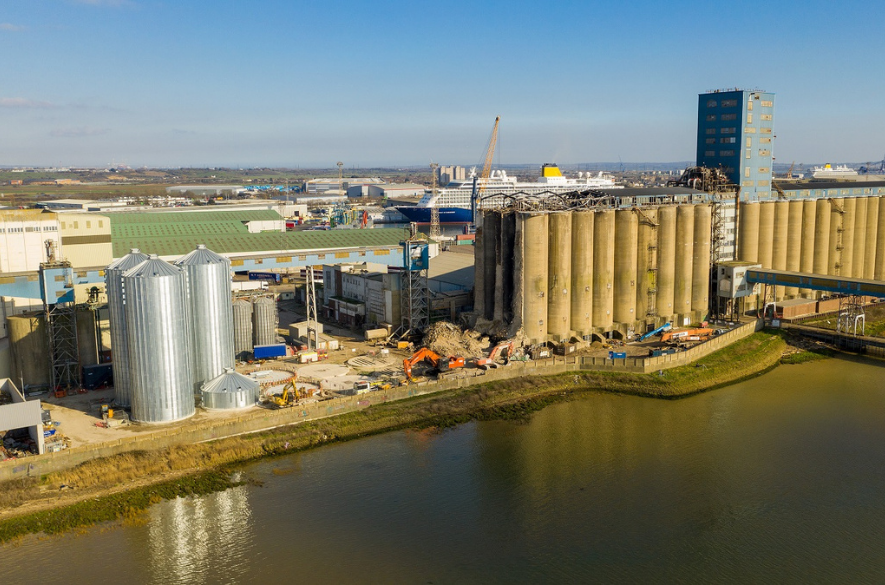 Major building work is underway at the UK’s largest grain terminal at the Port of Tilbury following a fire* in 2020 which damaged its grain silos.

The Tilbury Grain terminal has been in operation for over 50 years and is a key strategic facility in the South East of the UK for the grain import and export markets handling over 2 million tonnes of product from around the world. Grain is a key commodity in the UK food supply chain for a number of uses, most notably within the flour milling and bakery industries.

Demolition of the damaged concrete silos is underway and, at the same time, construction of phase one of metal silos is underway with the first three new silos having been constructed. The new silos, both phase one and phase two which will see the reconstruction of the concrete silos, will come online in stages. Phase one is expected to return 20,000 metric tonnes of capacity in early 2022 and the remaining 34,000 m/t of storage will be restored in 2023. These will all be constructed to the highest health and safety standards and will be industry leading.

Peter Ward, Commercial Director at The Port of Tilbury said: “The grain terminal is a vital asset at The Port of Tilbury and plays a major role in supplying businesses with the grain needed to support their brands. Following the fire last summer, we worked hard to ensure there was limited interruption to customer service and now with the new silos being constructed, we can be confident that the new facility will set the highest industry standards for silo construction. In the meantime, we want to extend our thanks to our customer base for the loyalty and support they have shown us through what has been a difficult period.”

During these works there will be no interruption to customer service as the terminal remains fully open for import and exports and once complete, the terminal will be restored to its full storage capacity of 135,000 m/t and continue to benefit from the full multimodal services at the port including river barge transportation into central London.

The Tilbury Grain terminal is the key strategic facility in the South East of the UK for the grain import and export markets handling grain from around the world supporting the flour and ingredient market for the southeast, London and up to the Midlands. Its riverside berths have space to host post-panamax vessels – greater than 40,000 tonnes – but can also handle a range of coaster vessels on its inner, outer and coaster berths.

The terminal also operates a monthly coastal shipping service from Tilbury to its sister port in Kirkcaldy, Scotland for Carr’s Milling. The terminal regularly handles cargoes from in and out of the UK and to countries across the world from the USA and Canada to France, Thailand and Australia.

*The fire at the grain terminal was in July 2020 and damaged the silo tower and some other equipment. Investigations are still continuing into the cause of this fire. No one was injured.