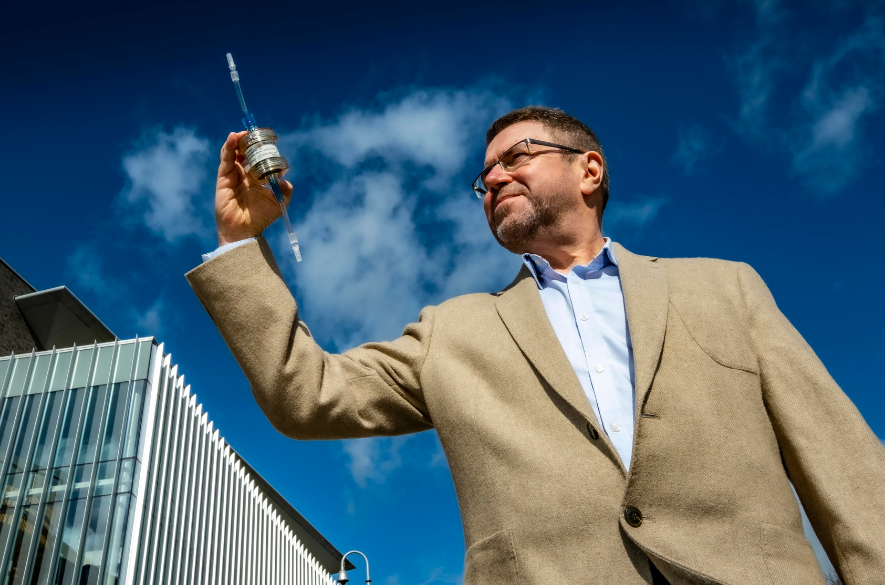 Scottish bio-tech company, BioCaptiva, has developed a novel next generation “liquid biopsy” technology device that could revolutionise the early diagnosis and monitoring of difficult to detect cancers.

The University of Edinburgh spin-out has raised over £1m in seed funding from Edinburgh-based business angel investment syndicate, Archangels, and Scottish Enterprise, to help develop the technology.

To prepare the company for this next stage in its development, BioCaptiva has appointed Dr Frank Armstrong FRCPE as non-executive chairman and Dr Stephen Little as a non-executive director.

BioCaptiva has developed a medical device that captures cfDNA (circulating free DNA) from the blood of patients in much greater quantities than the current standard of a single blood draw can, overcoming a significant current limitation of cancer liquid biopsy testing.  Named BioCollector, it works alongside a standard apheresis machine, filtering cfDNA from the patient’s blood system.

The BioCollector is based on a decade of research at the University of Edinburgh, led by Professor Tim Aitman, Director of the Centre for Genomic and Experimental Medicine, and Professor Mark Bradley of the University’s School of Chemistry. Both researchers are co-founders and directors of the new company.

Prototypes indicate the potential to detect early-stage cancers in patients without the need for a surgical biopsy and promising new approaches for monitoring and detecting disease recurrence which is not currently possible. This should mean it is possible to gain deeper insights into tumour biology resulting in better patient outcomes.

The seed investment will enable BioCaptiva to in-license the technology and carry out its first trials to prove its safe use in humans. BioCaptiva has been launched with the support of Edinburgh Innovations, the University of Edinburgh’s commercialisation service.

Should the technology prove successful, BioCaptiva plans to scale up its technology ahead of regulatory clinical trials, scheduled for completion during 2024.

The market for BioCaptiva’s technology is believed to be significant, with recent reports* highlighting the significant growth this market has undergone, increasing by a compound annual growth rate of 33.4% and projected to be valued at more than US$6bn by 2025. BioCaptiva expects interest to come principally from companies that are developing novel cancer tests limited by current methods of extracting cfDNA, where the higher yield achieved by the BioCollector will increase the sensitivity of their detection methods.

Commenting on the prospects for the BioCollector, Jeremy Wheeler, CEO of BioCaptiva, said:

“The BioCollector is a disruptive technology which will be transformational for liquid biopsy testing. We are confident that this platform technology can make a significant impact in this important area and, ultimately, enable cancers to be detected more quickly and accurately, enabling patients to receive precision cancer treatment as early as possible.”

“BioCaptiva has the potential to provide pharma companies and clinicians with high levels of cfDNA from individual patients that could revolutionise the way some cancers are detected. This has the potential to vastly increase the sensitivity and applicability of liquid biopsy for detection of cancerous tumours which are often diagnosed too late to enable specific treatment options to improve outcomes”.

“I’m delighted that after several years of work with colleagues in Edinburgh, we will now progress towards first-in-human trials. BioCollector will provide a step change in the capabilities of liquid biopsy for cancer detection and diagnosis. We are excited to be moving our device into this market with its huge potential for advances in the care of patients with cancer.”

Dr Frank M Armstrong, has been appointed Chairman of BioCaptiva.  Frank has extensive experience of developing healthcare products across a range of therapeutic areas.  He has previously led Medical and Development organisations at a number of major pharma companies and has been the CEO of a number of life sciences companies. He has also worked in the pharma industry leading Medical Science and Innovation at Merck Serono, Worldwide Product Development at Bayer and the Worldwide Medical Organisation at Zeneca.  Frank has experience as a chairman and as non-executive director in the UK, Finland, Switzerland and the USA with private, AIM and NASDAQ listed companies, and is a Court Member at the University of Edinburgh.  He holds degrees in biochemistry and medicine from the University of Edinburgh and is a Fellow of the Royal College of Physicians in Edinburgh and a Fellow of the Faculty of Pharmaceutical Medicine.

Dr Stephen Little is a scientist and entrepreneur with a long and successful career in the fields of personalised medicine and molecular diagnostics. Following time spent as a research leader with Celltech, and later AstraZeneca PLC, he founded the pioneering personalised health company DxS which was later sold to QIAGEN.  He  went on to establish Premaitha Health (now Yourgene PLC) as a leader in the field of reproductive genetics.  He retains an active role at Yourgene but is also enthusiastically involved in the encouragement of early-stage companies such as ClinSpecDx and BioCaptiva.  He holds a PhD from Heriot-Watt University in Edinburgh.  Stephen will become a non-executive director and Investor Director.