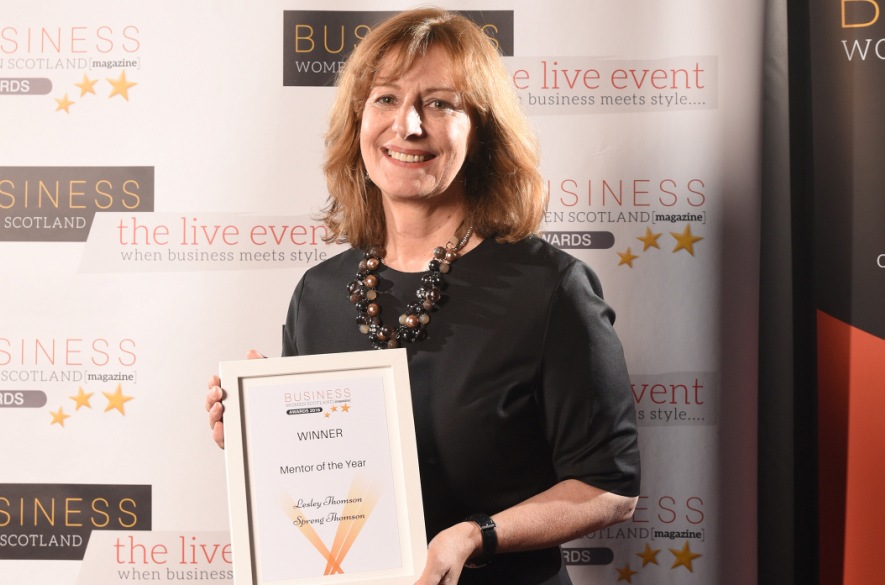 Lesley Thomson, Managing Director of Spreng Thomson, has been announced by Business Women Scotland as their Mentor of the Year.

The Business Women Scotland Awards celebrate and recognise the most enterprising and successful women in Scotland. This year’s event was held on Thursday 27th October in the Grand Central Hotel, Glasgow and featured guest speaker, broadcaster Carol Smillie.

Lesley was nominated by Borders-based designer printmakers, Orwell and Goode, whose Managing Director, Bronagh Tesch, said: “Lesley has made a huge difference to our company in a very short space of time. She helped me think about our brand image at a time when we needed to be clearer about the future direction of the company.”

Lesley developed a programme for the company which included the bespoke brand building process, BuildMyBrand®, which she developed in partnership with Janice Kirkpatrick, one of the founders of Glasgow-based design studio, Graven.

The recent changes to the business, made under Lesley’s guidance, have had a positive impact on the company. Orwell and Goode travelled to Japan for their first overseas trade show with a new collection which was developed in line with the new brand approach.

“Lesley had experience of working in Japan and gave me some great advice about doing business there. She helped in transforming the brand and, as a result, transforming our prospects. She is an outstanding, inspirational woman whom I feel incredibly lucky to have as my mentor,” Bronagh added.

Lesley Thomson is Managing Director of Glasgow-based communications business, Spreng Thomson, and has a background in journalism, corporate communications at director level and over 20 years running her own business. Lesley has held senior in-house positions with Guinness PLC / United Distillers and Scottish Power. She is also a Governor of Glasgow School of Art, a Trustee of the Dewar Arts Awards and a member of Entrepreneurial Scotland.

Lesley said: “I feel privileged to have had the opportunity to work alongside such an exciting young company as Orwell and Goode and I hope I’ve helped them on the road to developing their brand into a successful business. Being a member of Entrepreneurial Scotland has given me the opportunity to engage with some fantastic Scottish businesses at various stages in their development and I’m constantly amazed at the quality of talent that he have here in Scotland.”

Sandy Kennedy, Chief Executive of Entrepreneurial Scotland whose mentoring programme brought Lesley and Orwell and Goode together in partnership with Scottish Edge, said: “Congratulations to Lesley on being awarded Mentor of the Year. As a mentor she has advised, supported, inspired and provided encouragement to Orwell and Goode to realise their own potential and help them to grow their organisation.

“As part of Entrepreneurial Scotland’s commitment to making Scotland the most entrepreneurial society in the world, we view mentorship as a key benefit of our network. Our mentoring programme supports entrepreneurially minded people with the ambition to grow and scale their businesses and to develop their careers.”