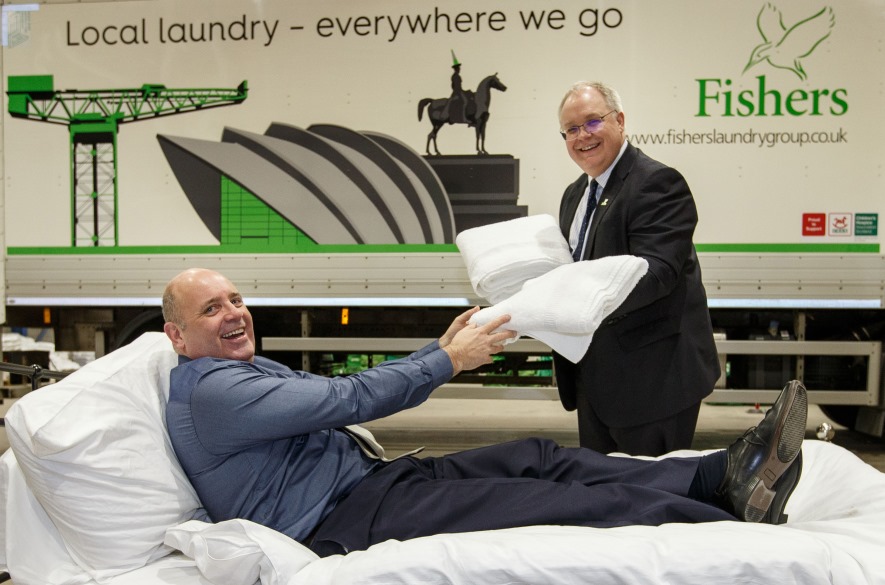 Fishers’ new laundry was officially opened by Marc Crothall, Chief Executive of The Scottish Tourism Alliance (STA) the national trade body, on the opening day of its national tourism conference which is being held in Edinburgh and is at the heart of this year’s Scottish Tourism Week Signature Programme.

Located just 11 miles from Glasgow city centre in Palacecraig Street, Coatbridge, the facility has the capacity to wash and dry around 600,000 items of bed linen and towels a week for existing customers’ 8,000 hotel rooms and potentially 4,000 further rooms.

The project represents an investment of £5million and features the most advanced laundry equipment available. It is among the most energy efficient plants in Europe, with heat recycling and low temperature washing. The plant also features high tech camera inspection equipment for quality assurance and radio frequency identification (RFID) scanning which allows Fishers to accurately track the movements of hundreds of thousands of linen items.

Fishers took the opportunity to unveil the first of its familiar fleet of green and white trucks to sport new livery featuring iconic tourism landmarks to tie in with the 2016 Year of Innovation, Architecture and Design. The first truck, which will be based at Coatbridge and seen regularly on the streets of Glasgow, features imagery of the city’s Finnieston Crane, the Clyde Auditorium (known locally as the Armadillo) and the statue of the Duke of Wellington – complete with its famous traffic cone.

This is the first in a series of new designs that will adorn Fishers’ fleet of over 80 vehicles, demonstrating the company’s continued support for the hospitality and tourism sector in Scotland and the North of England.

Cupar-headquartered Fishers was established in 1900 and now washes, irons and delivers more than two million items a week. The company provides linen and workwear laundering and rental services to the hospitality, healthcare, manufacturing and pharmaceutical sectors. The business currently operates from seven sites in Scotland and the North of England.

Michael Jones, Fishers’ Managing Director, said:
“We’re immensely proud of our new super laundry which underlines our commitment to investing in the business in order to service the needs of our customers in the tourism and hospitality sector here in Scotland. Being close to our customers is really important to us and this new facility brings us 60 miles closer to the growing Glasgow hotels market.

“Fishers’ trucks are a common site on the roads of Scotland and the North of England, where our customers are located, and we wanted to underline our commitment to the tourism industry.”

Marc Crothall, Chief Executive of The Scottish Tourism Alliance, said:
“Scottish tourism contributes £12billion to the country’s economy. Our Tourism Scotland 2020 strategy relies on the support of companies like Fishers to deliver high quality, value for money experiences at every stage of the customer journey. Fishers’ commitment to providing high quality linen and a first class service to hoteliers and restaurateurs helps to ensure that we achieve this. The STA believes that ‘Tourism is Everyone’s Business’ and Fishers’ investment in this new super laundry is an admirable demonstration of the company’s commitment to making tourism their business too.”

VisitScotland Regional Director, Annique Armstrong, said:
“In this Year of Innovation, Architecture and Design, we’re celebrating technological advances which contribute to Scotland’s commercial strength and success and Fishers’ new state-of-the-art, energy efficient laundry is a great example of that.

“This impressive facility will play a vital role in servicing and supporting tourism and hospitality businesses, ensuring they consistently deliver the very best of quality to their customers. Its opening, with the new jobs it has created, is not only excellent news for the industry but also for the local economy.”