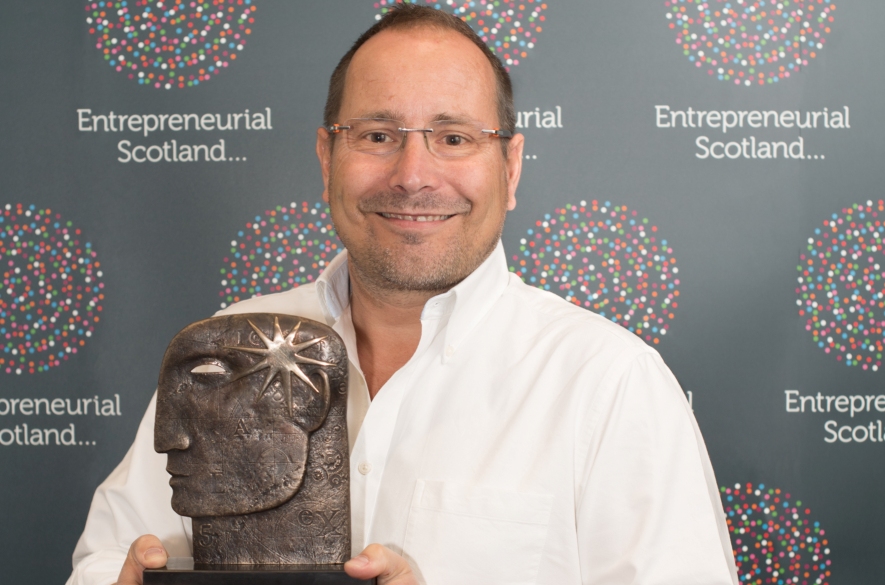 Entrepreneurship is thriving in Scotland. This was clear to see as the winners of Entrepreneurial Scotland’s Awards were announced at their celebration dinner on Thursday 30th November 2017. More than 400 of Scotland’s most successful and respected business and entrepreneurial leaders attended the event at SWG3 studio warehouse, a former galvanisers’ steelyard, which has evolved into a world class, state of the art, multi room venue.

Scotland’s longest running entrepreneurial awards were hosted by broadcaster and musician, Dougie Vipond, honouring those individuals who have excelled in entrepreneurial leadership over the past 12 months and celebrating the 10th anniversary of the Saltire programmes.

Entrepreneur of the Year was awarded to Gareth Williams, the CEO and co-founder of Skyscanner, a leading global travel search site and app and one of Scotland’s first ‘unicorn’ companies. Sold in 2016 to Ctrip for £1.4bn, Skyscanner continues to operate independently and remains headquartered in Edinburgh. The company employs over 900 staff in ten offices across the world and continues to demonstrate impressive growth with over 60 million visitors to the site every month.

Richard Slater, Partner and Head of Private Markets at Deloitte – the sponsor of the ‘Entrepreneur of the Year’ award category – said:

“Under Gareth’s careful management, Skyscanner has transformed into one of Scotland’s biggest entrepreneurial success stories. Born out of true entrepreneurialism during a brainstorm at the local pub with his two friends turned co-founders, Skyscanner is a company Scotland and its business community is immensely proud of. Gareth continues to play a vital role in the technology sector, sharing his experiences to mentor and support the Scottish start-up community. He is an extremely deserving winner for this year’s Entrepreneur of the Year.”

Scale-Up Entrepreneur of the Year was awarded to Angus MacDonald who has served as Chairman and shareholder to three leading Scottish businesses: ICS Learn in education, SWR in recycling and Renewable Parts which supplies spare parts for wind turbines. The businesses have a combined turnover of more than £45m, employing 170 staff and profits of £4.5m in 2017. The award is sponsored by Barclays, reinforcing its proposition to help businesses move on to a global stage in response to Scotland’s scale up gap that was highlighted in the ‘Barclays Entrepreneurial Index’ published earlier this week.

Rising Star Entrepreneur of the Year was awarded to Callum Murray, CEO of Amiqus, a tech start-up based in Leith with a mission to make civil justice accessible to everyone. This year Amiqus has more than doubled in size, attracted investment from across the UK / US, won a string of new clients during the second half of 2017 and won Barclays ‘Start-up of the Year’ for Scotland & Northern Ireland last month.

The Rising Star Entrepreneur of the Year – a new award category for 2017 – was introduced to recognise the collective impact of the entrepreneurial ecosystem in supporting emerging entrepreneurial talent. The award recognises the individual who has demonstrated a truly entrepreneurial mindset and considerable potential to drive growth and change. Nominations came from organisations that include Converge Challenge, Scottish Edge, Future X and Cultural Enterprise Office.

“Congratulations to Gareth, Angus and Callum. Every year it is truly inspirational to meet the finalists and hear what they have achieved. The reality of being an entrepreneur is relentless. You are constantly challenging the norm and in many ways you are never satisfied. They are a force of nature and are all playing their part and bringing something different to Scotland.

“Every one of this year’s finalists demonstrated humility and tenacity and talked about their teams and how they couldn’t have done it without them. Our winners and finalists exhibit these entrepreneurial traits and we use our awards as a platform to celebrate this and inspire others to go out there and do it, whatever their role or their organisation.”

The Awards follow on from a special Scale-Up Scotland Forum hosted during the day by Entrepreneurial Scotland, Scottish Enterprise and Highlands and Islands Enterprise. Over 140 Scottish entrepreneurs, investors and advisors gathered at the University of Strathclyde’s Technology and Innovation Centre to discuss how to overcome the scale-up challenge in Scotland. Speakers included: Sir Tom Hunter, Bob Keiller CBE and Sherry Coutu CBE.