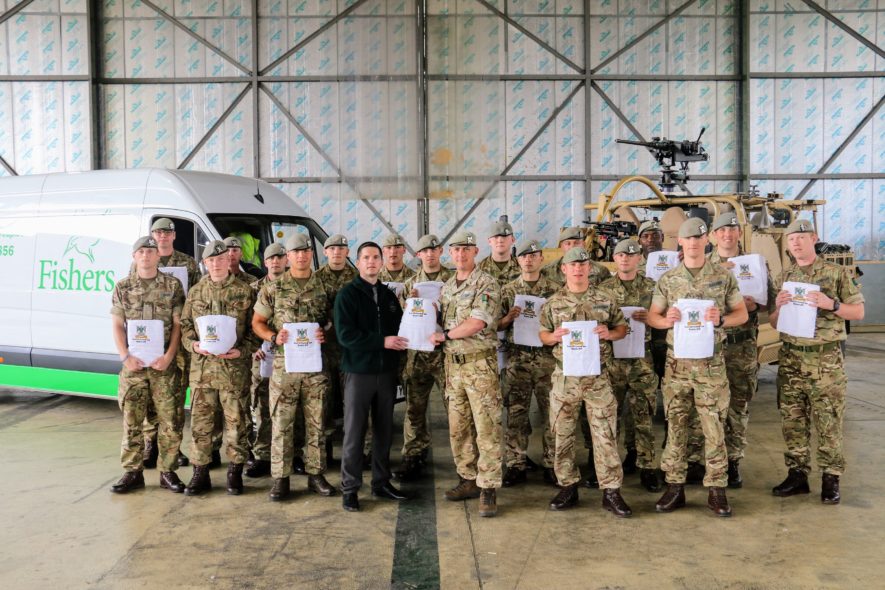 To mark National Towel Day (25 May 2018), Fishers, the market leader for laundry and textile rental services in Scotland, has delivered 20 personalised towels to its local army regiment.

The Royal Scots Dragoon Guards took receipt of the towels which they will use on a sun drenched football tour of Toronto, Canada, next week.

The regiment’s football team has spent the last 12 months undefeated and recently celebrated lifting the Scottish Tri-Service League. As a reward for their efforts on the football pitch, Staff Sergeant Scotty McCall has kept his promise to take the 18-man squad on a week-long football tour of the Canadian city.

Andy Mackay, Operations Manager at Fishers, knows the team’s captain Corporal Paul Chilvers well and decided they could use some towels while on tour as temperatures hit almost 30 degrees at the start of June.

The tour of Toronto begins on May 28 and the Leuchars men will play various teams including the Toronto Police Department and an amateur select side while also taking part in some team building events.

To raise money for the tour, the team cycled rowed or ran the distance from Leuchars to Toronto in 10 hours while the Dundee Football Club manager, Neil McCann, gave the team a training session in advance of their trip.

Andy Mackay, Operations Manager at Fishers, said: “The Royal Scots Dragoon Guards are our local regiment and only a few miles down the road from our plant in Cupar. As part of National Towel Day, it is only fitting that Fishers, the regiment’s local laundry supplier, should provide them with some personalised towels to take on their trip to Toronto.

“I know the guys in the regiment well and know how hard they work at their day jobs so they really do deserve this trip to Toronto where I am sure they will do the local area extremely proud.

“Everyone at Fishers would like to wish them the very best of luck on their travels and hope the guys have a great trip and return still unbeaten.”

Scotty McCall, Staff Sergeant at The Royal Scots Dragoon Guards, said: “Everyone at the regiment is really excited about our tour of Toronto and we would all like to say a massive thank you to Fishers for donating these personalised towels.

“We are really grateful to the local community and to Fishers for supporting us in our fundraising efforts and can’t wait to get to Canada.”