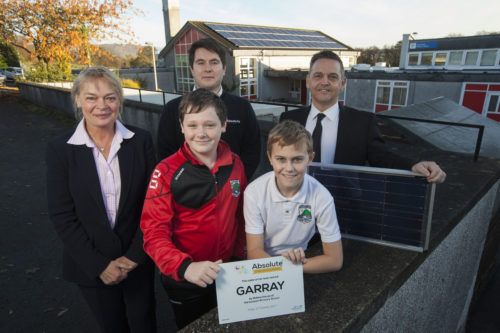 Students at Gartocharn Primary School recently celebrated the completion of a brand new solar PV system. The 78 x 270w panels – installed by local renewable energy experts, Absolute – has the capacity to generate 18,333 kWh (kilowatt hours) per year for the school.

The green flag eco-friendly school is situated on the edge of the village of Gartocharn in the Loch Lomond & The Trossachs National Park and this new solar array will boost their energy efficiency credentials even further, along with the install of a biomass system last year.

Absolute launched a competition asking the school to name the solar array. The school is divided into three houses called Black Grouse, Robins and Buzzards. Renowned for its commitment to green energy, the school had no shortage of inspiration or knowledge about the power of solar technology.

The prize was a specially designed plaque with the winning house name etched on it to commemorate the install. The names were very imaginative and the team at Absolute was very impressed with the great effort and thinking behind the names.

On Friday 27 October, Directors Tom Newall and Jason Lowey from Absolute attended the school assembly where they addressed the school and parents, sharing some insight into one of Scotland’s most respected renewable energy companies.

“It’s humbling to see so much interest from the children in the future of energy production. It is a priority for Absolute to encourage and promote Science, Technology, Engineering and Maths (STEM) among the next generation. Gartocharn Primary School should be proud of their carbon reducing and sustainable energy efforts, they’re no doubt setting a brilliant example for other schools. We have had a great morning at the school and we look forward to hearing what interesting projects the children embark on.”

The winning name was suggested by Robins House and they created a very original and memorable name; G.A.R.R.A.Y.

“We think G.A.R.R.A.Y. is a good name because it includes three things: GAR (stands for Gartocharn), ARRAY (because it’s an array of solar panels), and RAY (because it’s powered by the sun’s rays. We also like it because it sounds like a real name!”

Petra Biberbach, board member on the Loch Lomond and Trossachs National Park and also Chief Executive of educational charity, Planning Aid Scotland (PAS), was invited to attend and present the plaque to the winning House. Commenting at the event, Ms Biberbach said:

“I can’t think of a more appropriate name for a solar array here at Gartocharn Primary School. All the children have to be congratulated on being so imaginative. I like the fact that ‘G.A.R.R.A.Y.’ is linked to the local area and also linked to the weather, which is particularly meaningful and essential for the sun to generate energy. The array that Absolute has installed is a welcome addition and paves the way for the future of the energy output here. There is no doubt that it will deliver real benefits for the school and it is great to see so many young people engaging with renewable energy.”

“The project was a great opportunity for our pupils to learn about solar technology and energy efficiency, and all of our young people were excited to be involved.”