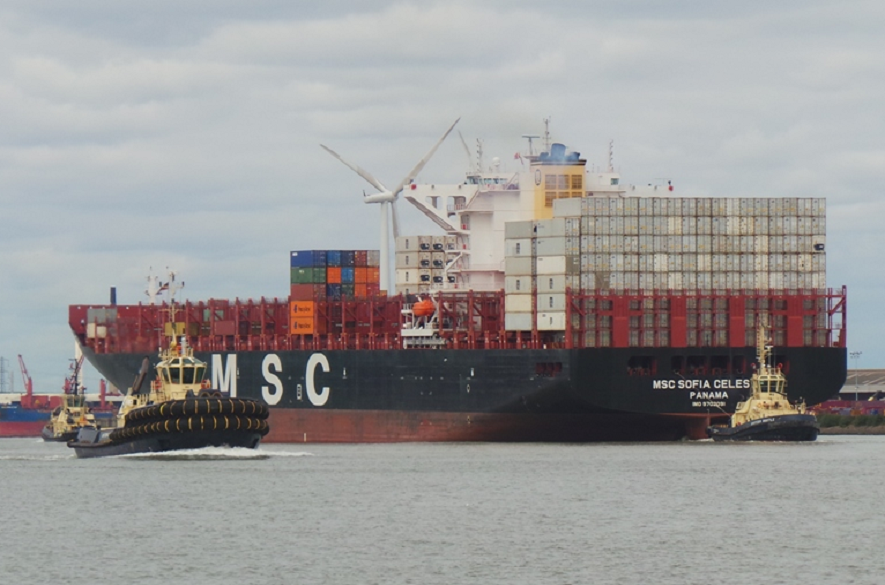 London Container Terminal in Tilbury, along with the Port of London Authority (PLA), welcomed the inaugural call of MSC’s neo-panama vessel to the Thames this week following her transit of the newly enlarged Panama Canal.

The MSC operated vessel, Sofia Celeste, has a capacity of over 8,800 TEUs (Twenty-foot Equivalent Units) and is the first in a new class of vessels deployed on a reconfigured service connecting the West Coast of South America, East Coast of North America and Northwest Europe. The vessel is the first to call into the UK after having transited the new Panama Canal.

LCT is the UK’s largest reefer container terminal and one of the most efficient UK ports for handling containers. This new service from MSC into LCT comes as a direct result of the opening of the Panama Canal Expansion in June this year (2016) which now allows larger vessels to transit the famous waterway.

Commenting on the new service, Ross McKissock, Head of Commercial from London Container Terminal said: “It is very exciting for us all here at LCT to see neo panamax class vessels in our port this weekend. The MSC Sofia Celeste marks a step change in connectivity for Tilbury’s customers offering much improved links to the growing S. American and Transatlantic market allied with access to Europe’s largest portside chill store which NFT opened at the port this year.”

Natasha Griffin, Commercial Import General Manager for MSC, said: “Following the recent opening of the expanded Panama Canal, we have created this new service for our customers. It allows larger vessels to transit the canal, directly linking the US and South America with Europe. We are delighted to have called into London Container Terminal, following the vessel’s first voyage through the Canal, and we look forward to further developing services of this kind in the future.”

Captain Bob Baker, Port of London Authority (PLA) Chief Harbour Master said: “It is excellent to see this ship arrive in the Thames – underlining our shared commitment with London Container Terminal to continue to grow trade and new business opportunities. The PLA continues to provide the modern pilotage and Vessel Traffic Service to ensure the efficient arrival of ships into this busy port.”

The MSC Sofia Celeste was completed in 2014 and has an on-board capacity of 8,819 TEU’s, of which 1,462 can be used with refrigerated container plugs for transporting perishable cargo. The ship is the first to trade on MSC’s newly redesigned South America West Coast-USA-Northwest Continent service line, which makes stops in Chile, Peru, Ecuador and the Bahamas, Philadelphia and then Rotterdam.