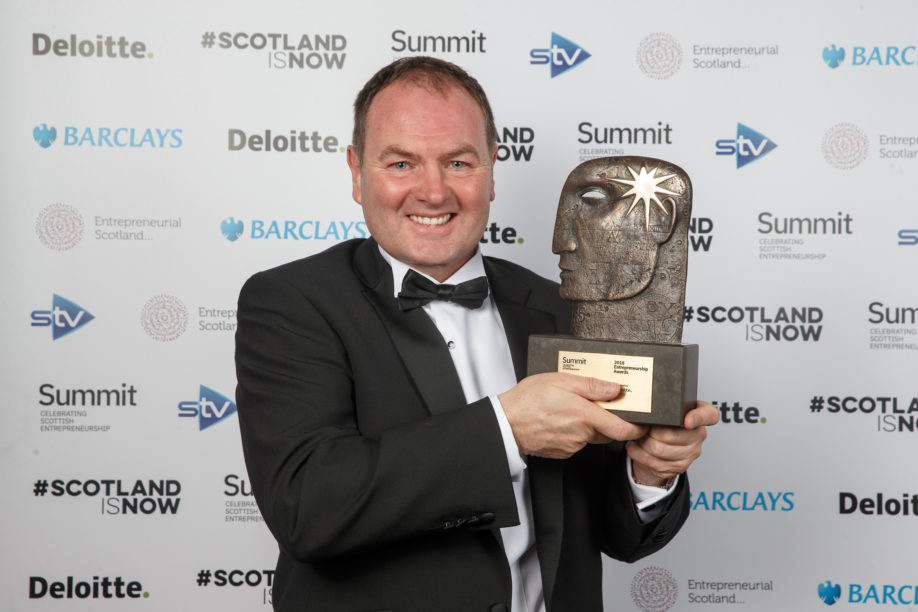 The winners of the inaugural Summit Entrepreneurship Awards were announced last night (Thursday 22 November) at a stellar celebration dinner, in Glasgow.

Designed by STV and Entrepreneurial Scotland to honour our most inspirational established and up-and-coming entrepreneurs, from a range of backgrounds and sectors, the prestigious awards highlight the breadth of Scotland’s entrepreneurial talent.

The 2018 Summit Entrepreneurship Awards are supported by Deloitte, Barclays and Scotland is Now. This year’s awards are also organised in collaboration with the Scotland CAN DO movement.

Entrepreneur of the Year was awarded to Derek Pierce, Managing Director of J&D Pierce Contracts, one of the largest structural steelwork contractors in the UK. The company was established in 1975 in Glengarnock, North Ayrshire, providing light fabrication and general blacksmith work. Today, J&D Pierce, employs 350 staff across six divisions and has been involved in prestigious projects including Aberdeen Exhibition and Conference Centre, Glasgow Queen Street Station redevelopment and Gatwick Airport’s new hanger for Boeing.

Richard Slater. Partner and Head of Entrepreneurial Business in Scotland with Deloitte, sponsors of the ‘Entrepreneur of the Year’ award category, said: “The achievements of J&D Pierce over the past 12 months have been remarkable. Derek and his team have enjoyed standout success at a time when Scotland’s entrepreneurs are delivering at home and abroad. Their recent work shows how our local businesses bring tangible benefits to some of the UK’s most significant projects.”

Scale-Up Entrepreneur of the Year was awarded to Steven Gray, CEO of ROVOP. Steven established the remote operated vehicle (ROV) venture in Aberdeen in 2011, building it into a leading player in the oil, gas, offshore wind, telecoms and power transmission industries. ROVOP now has 51 ROVs and 200 staff in Scotland and the US. The company’s global client base includes customers in the UK, EU, Middle East, US, and South America.

Stuart Brown, Head of SME Scotland & Northern Ireland at Barclays, the sponsor of the Scale-Up category, said: “Scaling up is a vital stage in the entrepreneurial lifecycle and one which Barclays is committed to supporting. We have to ensure ambitious companies have the support infrastructure to evolve to the next stage, be that growing revenue, diversifying into new products or entering new markets. ROVOP has done all three. Under Steven’s inspiring leadership, it has transformed from an Aberdeen start-up to a global business in just seven years with strong value and employment created, as well as significant further potential. No mean feat in any sector, but particularly powerful given the recent challenges in oil and gas which made him a worthy winner of this award.”

Cat Leaver, Director at Brand Scotland (Scotland is Now) who supported the category, commented: “It’s incredibly important for us to consider the legacy of the Year Of Young People and continue to celebrate their many contributions and successes. This award is just the beginning of that. The strength and diversity of the applicants in this category was utterly outstanding, reflecting a huge amount of creativity and vision. Isla displayed entrepreneurial spirit and strong leadership in effectively commercialising an idea that has the potential to really scale. We were hugely impressed by the many complex operations, from manufacturing to distribution chain management that Isla and her team have put in place. Congratulations to her and all the wonderful nominees.”

The awards were established to showcase the impressive range of Scotland’s entrepreneurial talent across a mix of industries and sectors, and to shine a light on the people who are creating and growing our most successful enterprises across our private, public and third sectors.

Hosted by broadcaster, Rona Dougall, the awards night at SWG3, was the culmination of a rigorous review of more than 250 nominations to determine the finalists in each of the seven categories. The expert judging panel included some of Scotland’s most successful entrepreneurs.

STV Commercial Director, Peter Reilly, said: “We are proud to work with inspiring Scottish entrepreneurs every day – people who have established, built and continue to grow thriving businesses for Scotland. At STV we have been privileged to showcase and celebrate fantastic entrepreneurial stories on-air sharing these impressive achievements with Scots across the country. We are delighted to realise the aims of Summit to both inspire future entrepreneurial leaders and to increase awareness amongst consumers of Scottish businesses. A massive congratulations to all our outstanding winners.”